Our day started with a 7am breakfast ready to meet our bus at 8:00. It was a slow dive through peak hour traffic into the middle of Bridgetown, the capital city of Barbados. It was the first day of school after holidays, making the going particularly slow.

Richard “RC” Daniel, our guide and helper, pointed out a few landmarks along the way, although most of the musicians seemed more interested in chatting or listening to music through headphones. It seemed odd to me to be in a new country with so many novel sights and yet remain glued to the same ipod screen and shut off in the same disconnected private world of music as back home.

Those of us who were listening noted cricket pitches, small traditional moveable cottages (“chattel houses”), and the slightly dilapidated offices of Prime Minister and Cabinet. We also saw the Barbados Light and Power Company where they burn oil to generate electricity. Barbados produces about 10% of the oil it needs, the rest being imported from nearby Trinidad. We drove past Cheffette, the local fast food chain and learnt that McDonald’s in Barbados went broke and vanished after only a few months. People in Barbados prefer to eat fish and chicken. KFC flourishes here.

We drove past some enticing beaches, had to stop while a middle aged white couple stepped casually across the (main) road, oblivious to the traffic. He was shirtless with beer gut spilling grotesquely over too-small shorts, her sneering condescendingly from under a garish hat. “Those are tourists”, our patient driver pointed out, helpfully.

Not far from the Queen Elizabeth Hospital and the pristine-looking Supreme Court building, and several 17th and 18th Century churches, forts and even schools we reached the Frank Collymore Hall (FCH).

The 500-seat FCH is Bridgetown’s main concert hall, located in central Bridgetown and named after a famous Barbadian “man of the arts”. We had a good crowd of about 300 people for our free lunchtime concert. We took the stage about 12:20pm after a long morning of setting up, sound checking, re-sound checking and warming up. Our first tune was Fun Time by Sammy Nestico, and the band did their best yet rendition of that Count Basie classic, probably inspired by hearing the actual Basie Orchestra in person a couple of nights previously.

It was a long set of about 80 minutes with no break By the time we ended with Dennis DiBlasio’s Coconut Champagne we were worn out but the audience was delighted, their enthusiasm reflected in CD sales afterwards. We sold out our entire stock. The good news is that that will help cover a meal for the band later in the tour, in Orlando.

After the concert we spent the late afternoon and early evening on a 57’ catamaran. There were a couple of stops for snorkelling to look at giant sea turtles plush fish at a 100-year-old shipwreck. Then, through the gathering dusk we sailed and had dinner. It was the group’s first taste of flying fish, chicken, macaroni pie and rice. This tasty quartet of dishes, served buffet-style, will probably become very familiar over the next few days!

After a relaxing evening it was back to the hotel for free time and bed. Although many in the band haven’t quite grasped the concept of bed yet, nor the possibility that there might be other guests sharing the hotel. We will be speaking to them about late night noise and “inside voices”. Some of them are behaving a bit like the tourists who delayed our bus on the way to FCH in the morning! 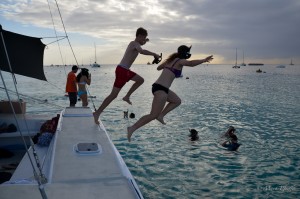 Looking forward to two gigs this afternoon: first at Crystal Cove resort and second at the Beach House restaurant.