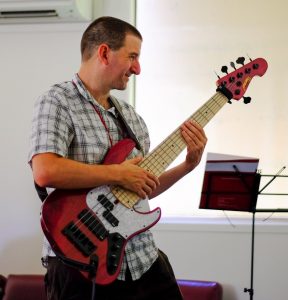 Saul Richardson is a guitarist and bass player. He holds a PhD from the University of Sydney where he also trained as a teacher, graduating with First Class honours in primary education. In 1995 was awarded the University Medal for his study of electric guitar in school music education.

Dr Richardson studied Jazz guitar under Steve Brien, Steve McKenna, and Dennis Keath, and conducting with Jerry Nowak. He is an internationally recognized Jazz educator, and served for two years as Australasian representative on the Executive Board of the International Association for Jazz Education (IAJE). He is a past recipient of the Merimbula Jazz Festival award for his educational work.

At Jazz Workshop Australia, Dr Richardson has developed a unique method for teaching jazz improvisation which has proven highly effective. Students can make astounding progress through this intensive, yet fun program.

Dr Richardson established and developed the renowned Jazz program at North Sydney Boys’ High School, which during the 1990s and early 2000s became widely regarded as a benchmark of excellence in its field in Australia. After 16 years of service, he retired from the position in 2011.

Dr Richardson was recognized by the IAJE at their January 2004 and 2006 conferences for his outstanding service to Jazz Education. He was a founding member of IAJE in NSW and works as a clinician, consultant and adjudicator, and lectured in Jazz Pedagogy at the Sydney Conservatorium of Music.

As a performer, Dr Richardson has worked with many of Australia’s leading Jazz artists and groups including Ed Wilson’s big band, John Morrison and Swing City Big Band, Andrew Firth, Roger Frampton, Don Burrows, Col Nolan, Keith Stirling and Tony and Bob Barnard. He has performed throughout Australia, the UK and Europe and in the USA. Saul has also played with international artists including Sherrie Maricle, Mike Tomaro, John Thomas, Gunnar Mossblad, Dennis Wilson, Lou Fischer and Jeff Jarvis. He composes music for his own jazz-fusion group ESP Device. 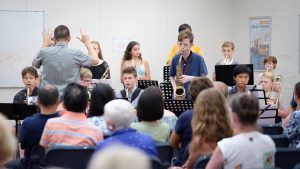 Saul has also been director of the NSW Department of Education and Training Arts Unit Stage Band, the SCEGGS Redlands school stage band, the Blue Riff and the Powerhouse big bands.

Dr Richardson’s past students have included many of the finest young musicians now making their own mark on the Australian and world Jazz scene. Graduates of his programs and ensembles can be found studying tertiary music across Australia, working professionally as performers and educators, or simply appreciating and hearing Jazz with discerning ears.

Saul Richardson is a member of of the Australian College of Educators (MACE), the Australian Band & Orchestra Directors Association (ABODA), the Jazz Education Network (JEN) and the National Association for Music Education (NAfME). Outside of music and teaching, Saul competes regularly in ultra-distance race walking events.