June 9-11 our Junior combo performed in the Merimbula Jazz Festival. Merimbula is on the far south coast of NSW, and the festival is one of the longest-running in Australia. We have sent groups there before but this is the first time we have showcased our youngest jazz players there.

The musicians in the combo are aged 9-13 years. They played twice on the official festival program and twice at the busy Waterfront Cafe on the wharf in the middle of town. The regular members Ben, Cameron, Damon, Liam, Olivia, and Oscar were joined at some of the gigs by Flynn, Keaghan, and Damon. They played wonderfully well and were very popular with the jazz fans in the audience. It is nice for a young talented group like this to have the chance to play for a paying audience of strangers who recognise what they are achieving and support them in it. 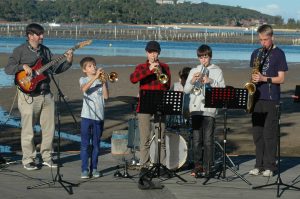 Some of the musicians were also playing with the SYJO2 big band at the festival, as well as the opening parade, making for some long days – all dealt with with enthusiasm and aplomb. Thanks to the festival and the Waterfront Cafe for having us!