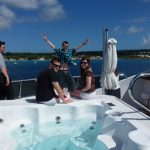 The next JWA International Big Band tour is to the USA and Barbados. This is for high standard musicians and experienced jazz students. Features include performances in clubs, 5 – star resorts, hotels, tourist precincts and concert halls. The band will also be workshopped by prominent US jazz artists. We put together and prepare a 17 – piece big band for the tour. Entry is by audition.

This is an opportunity for talented and ambitious young musicians to perform at an extremely high international level alongside peers who share a similar dedication to excellence in jazz. Members of the group get unique access to major jazz performers, educators, promoters and top quality venue: a potentially priceless “foot in the door” into overseas markets for aspiring professionals. In addition to making contacts the band can learn an incredible amount about playing, touring, performing…and the world. Every tourist can expect the most brilliant time on the trip and to experience remarkable growth in self-confidence, in musical skill and personally in a short time.

Once a musician has successfully auditioned for the tour group we email out practice parts and sample recordings where possible. Everyone learns their individual parts at their own pace. Then we bring the band together several time through the year, typically during school holidays, for extended rehearsals.

We are interested in hearing from musicians who can play well and are serious about learning and performing jazz. Musicians from all states of Australia and from other countries are welcome to join us. You just need to be able to get to Sydney a few times through the year for rehearsals.

If you or your child are interested in auditioning contact us and we can get the process underway. We can also email you a detailed brochure with far more information.

The tour begins with a final rehearsal block and concert at Jazz Camp in Sydney before departing for Atlanta and ending in New York, via Florida and Barbados. 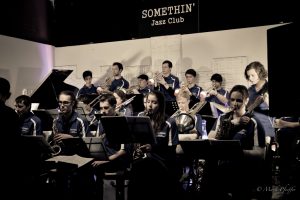 Here’s what one musician had to say about his experiences on the last tour:

Thanks so much for an amazing almost a month haha. I think I got way more out of the tour than I thought I was going to and I think that it was really good for me to do this sort of thing before I start

University. For example, I’m not only marking myself from the musicians around me anymore but I am thinking where I am in terms of the world!! New York was just mind blowing!!! And also a big one was always having a professional manner while performing and never looking, or sounding bad because you feel bad. It was a big lesson I learnt.

Thank you Saul and Karen so much 🙂