Our 2014 big band tour to the USA and Barbados is underway.

The group left Sydney early on New Year’s Day following three days of intensive rehearsals at the Jazz Workshop. The musicians came from many different parts of Australia having auditioned for a spot in the band after Jazz Camp last January. The touring group consists of 21 musicians, directors Saul Richardson and Karen Richards plus three members of the Pfeiffer family (Daniel Pfeiffer plays trumpet in the band).

Flying on Korean Airlines we had a brief stopover in Seoul before continuing on to New York’s JFK airport. It was a long but comfortable flight with plenty of movies and games in the personal entertainment systems for those who didn’t want to sleep.

We got in to New York early evening on 1 January, the day extended by flying “back in time” over the date line. It wasn’t long before our three shuttle buses had delivered us safely to our hotel, the Holiday Inn midtown. After settling in to our rooms we all took a walk out to see nearby Times Square and to get some dinner. It was a good introduction to the bitter cold of a New York winter, a real eye-opener for some of the musicians who didn’t really understand how cold it could be until they were out in it. “Yeah I’ll be fine” quickly gave way to the shivering realisation that this is seriously cold. Everyone dressed more warmly after that! 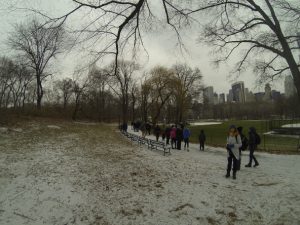 around New York and trying to get over any lingering jet lag. First we went to Central Park. It looked magical with elegant bare trees and frosty meadows. Some of the band were delighted and surprised to see squirrels frolicking in the park and people ice skating on an outdoor pond.

Next we walked by the Rockefeller Center with more ice skating and a glimpse inside the NBC TV studios with the Today Show being broadcast. From there we saw the spectacular and opulent terminal building at Grand Central Station. After a morning tea stop it was on to the Empire State Building. 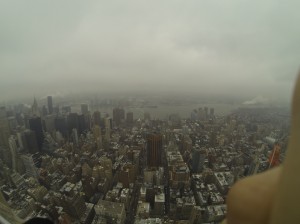 This massive tower was completed in 1931, astonishing to think of such an imposing building being constructed so long ago. It is from the era before form gave way entirely to function in skyscrapers so is full of Art Deco decorative features. We braved the long lines and then the bitter cold to go to the top. The day was cloudy so visibility wasn’t the best, but the view was spectacular all the same and the height dizzying. A bitter, chill wind blew on the outside viewing deck and no one was keen to linger out there. In fact, a big snowstorm was on its way to New York that night.

After the Empire State Building we split into several groups, but all headed in the same direction: to the shops around Times Square. Most people were interested in the many music shops in the area: brass, winds, guitars and vintage drums. Prices are very good and some people bought some things. Drummer Luke got some fine second hand Cymbals.

In the evening we went to Dizzy’s Club for the start-of-tour celebration dinner and to see a concert by the great Kenny Werner and his band. His trio was made a quintet by saxophonist David Sanchez and trumpeter Randy Brecker. It was an inspirational show. The stage at Dizzy’s has a spectacular backdrop with huge picture windows overlooking Central Park. Behind the band we could see the gathering storm and falling snow outside.

The club is part of the Jazz @ Lincoln Centre facility in the Time Warner building on Columbus Circle. It was just a short walk back through the swirling snow to the welcome warmth of our hotel. An annoyance for locals, the snow was an exciting and delightful novelty for us. 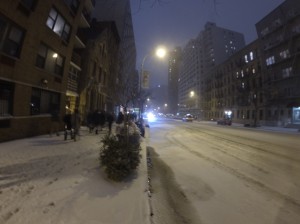 So, two good days done and everyone keenly looking forward to our first workshop and gig on Day Three.